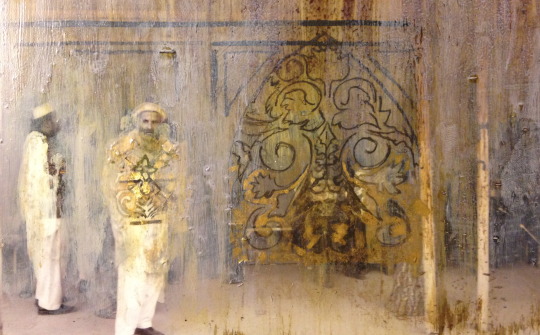 ‘I am the gate that fears no fall II, Kabul’, Mixed media on paper, 5 x 7 inches

We have certain expectations of art from war zones—that it should feature battlefields, be predominantly khaki-coloured and be painted by men. The art of Charlie Calder-Potts defies them all, despite drawing on her experience of being alongside the British Army in Helmand and Kabul in 2013.

Unlike most war artists, Calder-Potts was not ‘parachuted in’ to alien territory. She has been travelling around the Middle East since her teenage years, immersing herself in the rich culture of a region now almost exclusively presented by the media as an ideological battleground between East and West—a perception her exhibition sets out to correct.

She has developed a unique method of combining old and new in a single image. Using her own black and white photographs taken in Yazidi and Syrian refugee camps and in Erbil in Iraqi Kurdistan, she etches the photographic images onto sheets of metal—including recycled plates from scrapped ‘Warthog’ armoured vehicles brought back from Camp Bastion for her by the RAF—and begins to build the picture up in layers. Oil paint, pastel, pencil, ink, crumpled tissue and beeswax are progressively applied to the printed surface in glowing veils of textured and patterned colour, studded with signs and symbols that set the human figures in context and turn the picture surface into “a palimpsest of past and present, East and West”. 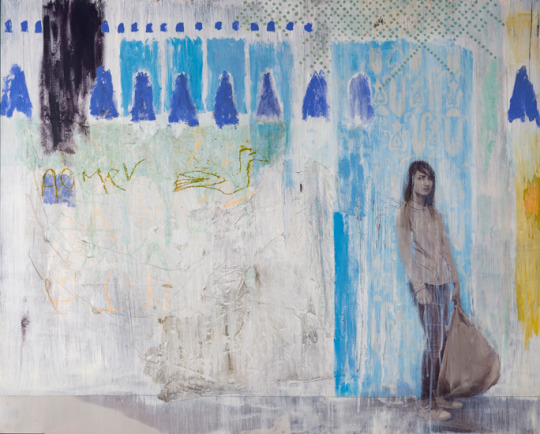 In I am still here, an Iraqi Kurdish girl in western dress carries a bin bag along a street in Sulaymaniyah beneath the inscription in the picture’s title, seen by the artist graffitied on a cell wall in the Sadaam-era prison in the city centre.

Intertwined Islamic and medieval patterns are a reminder of the vital links between our artistic traditions. In a series of small manuscript works on vellum inspired by Persian and medieval British illuminated manuscripts in the British Library, fragments of text from the Rubaiyat of Omar Khayyám and the 10th century Persian epic, The Shahnameh, are inscribed beneath snapshots of everyday street scenes from Iraq and London and framed within richly gilded floral borders. Young Londoners, photographed on railway platforms, have angels’ wings but are still fiddling with their mobile phones. “I want to keep them contemporary and not too dreamlike,” she says. “I don’t want to lose the fact that they’re here and now.” 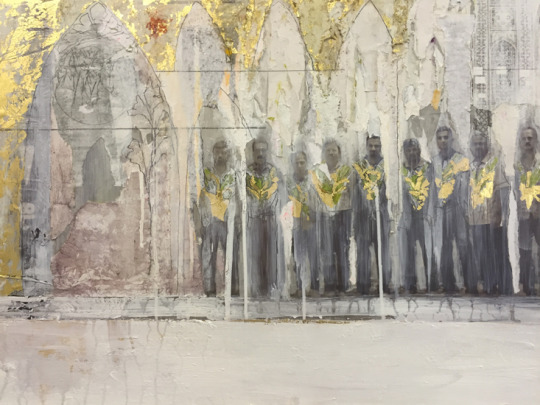 There’s no religious or moral message to Book of Kings; if these poetic paintings teach us anything, it’s the lessons of history. “But all the world is like a tale one hears; men’s evil and their glory disappears,” reads a manuscript quote from The Shahnameh under one image of a mosque in Iraq. Calder-Potts chose the exhibition title because “kings rise and fall and make the same mistakes their predecessors did”. By peeling back the layers of the recent past to reveal the heritage shared by East and West, she expresses the hope that the cycle can be broken.